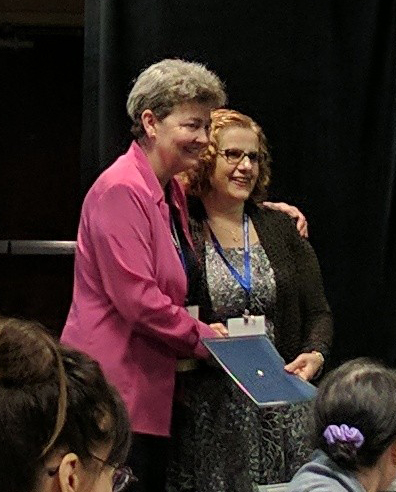 For her exemplary work in exploring the connection between objects and memory, the Association for Library and Information Science Education (ALISE) awarded Professor Lynne Howarth (MLS ’78, PHD ’90) with its prestigious 2017 ALISE / Connie Van Fleet Award for Research Excellence in Public Library Services to Adults. A plaque and $1,000 was presented to Professor Howarth at the 2017 annual conference in Atlanta, Georgia on January 19.

Professor Howarth presented a summary and assessment of her work at the conference.

Dean Wendy Duff says Dr. Howarth — a former Dean herself — is a worthy role model to anyone who works in Library and Information Science. “Her innate ability to work well with others, coupled with her insights, research skills, and ability to make people laugh, are just a few reasons why students and colleagues admire her so deeply,” she says.

The Fleet Award recognizes an individual, or a research team, for outstanding research contributions in the field of public library services to adults. It is named after Dr. Connie Van Fleet, Professor, University of Oklahoma School of Library and Information Studies, who was a member and contributor to ALISE for more than 20 years.

This is Lynne’s second major award from ALISE. She was also acknowledged for her long-term commitment and contributions to ALISE in 2015, with the ALISE Service Award at the annual conference in Chicago.

Since originally joining ALISE in 1987, Professor Howarth has held numerous positions within the organization. First serving as ALISE Board of Directors as Secretary-Treasurer for a three-year term from 1997-2000, Prof. Howarth was later elected as Vice-President of the organization in 2010, served as President from 2011 to 2012, and Past President from 2012 to 2013. During her time as President, she assembled a highly successful and profitable annual conference in Dallas, Texas, launched a new strategic plan for 2010-2013, and initiated a review of ALISE policies and procedures.

During her tenure with ALISE, Prof. Howarth had also served on a number of committees, including Membership, Governance, Budget & Finance, and Nominating, as well as the Council of Deans, Directors, and Program Chairs.

She served as Dean of the Faculty of Information Studies from 1995-2003. With research projects that span three decades, Dr. Howarth tackled topics such as information categorization strategies and mild cognitive impairment, knowledge organization, and collaboration and knowledge management.

Notable research includes her work with the Alzheimer Society of Toronto on an SSHRC-funded project to study how individuals with mild cognitive impairment associated with early-stage Alzheimer/Dementia may utilize multi-modal expressions of information such as music, photographs, etc., as memory cues for finding, organizing, and using information. To read about more of her research projects, please see page 27 of Informed Magazine.

Congratulations from the iSchool community on this prestigious recognition.